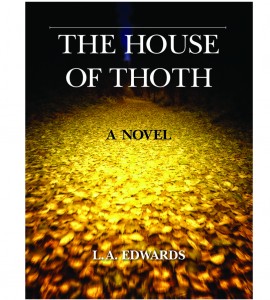 Thus that which is the most awful of evils, death, is nothing to us, since when we exist there is no death, and when there is death we do not exist. ~ Epicurus

If you thought you knew everything about the supernatural–guess again. In this haunting supernatural thriller, THE HOUSE OF THOTH casts the reader into a historical quest through time, space, and alternate dimensions: from 21st century America, Europe, and northern Africa; to the era of Noah preceding the historical flood described in biblical texts; to the lands of ancient Egypt where the gods and goddesses of mythology literally rule the world, and mystical forces of the underworld exist in an alternate universe midst the mortal realm.

From the first pages, the reader is cast into a preternatural world of esoteric societies, infamous lineages, and an archaic bloodline. Open your mind to the world of the supernatural as you become one with the protagonist, Doctor Lexi Covington as she seeks to uncover the truth behind the mysterious deaths of her loved ones, of her own identity, and her ancient family lineage. As the story unfolds, Lexi is held captive by a mysterious stranger from a mystical world and forced to continue her quest by his side. Entwined by the gods without their knowledge an unforeseen bond forms as the two seek answers buried deep within the desert of modern-day Egypt. Together they battle malevolent forces, sworn to protect ancient family secrets. As the two dimensions slowly dissolve, a sinister evil is released deep within the bowels of the underworld. Can Lexi and her captor uncover the truth before evil finds them?