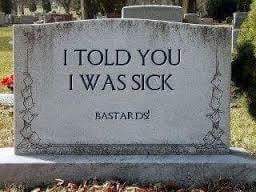 ‪#‎Lymedisease‬ is nothing to take lightly!

The CDC assures us they have Lyme disease under control. Not true. Not even remotely close. There is no cure for Lyme disease at this time. The closest one can hope for is remission.

Can you imagine how many people have contracted the disease this year?

While those figures won’t be in for months, one can only imagine.

Every state in the country has reported cases. While the disease is at pandemic rates in the eastern portion of the country including Florida, the upper mid-western states, and highly prevalent in the western part of the US in Oregon, California, Washington State, and Utah. These are the facts for the US, but Lyme disease has been identified world-wide and is growing at staggering rates.

With the warm summer we have had this year the ticks are waging war in our forests and grasslands. Everyone, including cats and dogs, should be examined. All it takes is one to change your life or your pets’ lives forever.

The symptoms mimic over 300 different diseases (you can see the full list HERE). Imagine yourself experiencing symptom from over 300 diseases. Some symptoms you can’t see. That doesn’t mean the person is not sick. So, the next time you hear one of your friends tell you they are sick and the doctors don’t know what it is, you might want to believe them. They might have Lyme disease or one of their co-infectors. Show some compassion. Don’t dump them merely because they can no longer do fun things with you. They need you now more than ever. They were your friends before they became ill, what makes them any different because they have Lyme or another disease? Lyme disease is not contagious. Nor are the hundreds of chronic illnesses that affect people each year. Many of these chronically ill people commit suicide each year due to depression. So the next time your friend tells you they are sick you might want to step back, believe them, or better yet imagine, it could be you.