Once you have your tick removed you will want to have it analyzed to find out if the tick carries Lyme disease. It is very important to understand every lab maintains their own protocols for analyzing samples. Very few labs in the US will test for Lyme Disease. With this in mind, you might want to review the three suggestions I have provided for having your Tick analyzed for Lyme Disease. It is important you either contact the lab personally or look at their website as how they want to receive your tick specimens. Labs are very particular. Some labs may accept live ticks in a small bottle others may require you freeze the sample overnight before sending it to them for analysis. It is recommended to check with the lab of your choice and remember there are only a couple of labs to choose from. Frozen samples must not preserved in Alcohol. Most labs will refuse Formalin it was once used to preserve samples it is a known carcinogenic chemical that should be handled only in supervised lab conditions.

One of the latest methods and easiest is to simply buy tick kits, they run about $20 dollars for the kit and $40 – $60 to have many of the important tests such as Lyme disease spirochete Borrelia burgdorferi, Babesia, Bartonella, Rickettsia, Ehrlichia, and Anaplasma 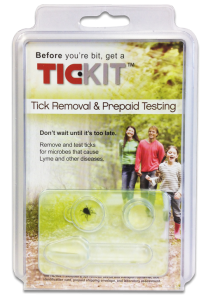